First, I got to say: Weird twitter definitely exists, and it is bigger and weirder than I imagined.

I want to write up some notes on my methodology for determining this, but I feel like some self-disclosure is in order.

I’m a PhD student with research interests that include community formation on the internet and collective intelligence. I’ve been studying theories about how communities establish their boundaries using symbols, and am also interested in “collective sensemaking.”

I am 27 years old and have been on the internet for long enough to know what I’m doing. I am really into conceptual art.

I’ve been aware of what I’ve referred to as “weird twitter” for some time, and have been curious what’s going on. I love it and love that it exists. But I didn’t know if it was real, or just something I was peripherally aware of because I followed a few people. It was much, much deeper than I had the patience to venture into at the time, but I had no sense of its scale.

Unfortunately, doing analysis on a gigantic unstructured digital social network turns out to be one of the big challenges of contemporary social science research. You either need to slurp a lot of data into something that crunches numbers, or you have to painstakingly research individuals in a tedious way that is not going to give you any general results on the scale necessary for this problem. So I tried a new method.

This method, which I don’t have a good name for, is basically: call it names, and see if it answers back. In other words, trolling.

I did this in August on a lark.

I’ll adopt some speculative language for a moment: what if “weird twitter” were a kind of collective intelligence? Is it self-aware?

There are many theories of how self-awareness arises. Some believe that a person’s self-awareness depends on their interacting socially with others. It will not be a self until it is treated like a self. Until then, it will exist in some pre-conscious, animal state.

Others have argued that the Internet is creating a “global brain” of collective intelligence. This raises questions implicated by but far more interesting than the question of whether “corporations are people”. In what ways can a collection of people be a person? Do they need to self-identify as a community before that happens?

So many interesting questions.

Of course, if it were true that “weird twitter” were just a bunch of people telling jokes, and not a community, identity, culture, or collective intelligence, then a blog post about them would be meaningless and ephemeral.

I should say: “Weird twitter” seemed like a fun bunch, mostly just a bunch of jokers who don’t take things too seriously. So there was no way such a post would be taken seriously unless, well, I was wrong, and some people took it very, very seriously.

I have never gotten more hate spam in my life. Holy crap.

It is a really good thing I have a thick skin, because the amount of abuse I’ve put up with in the past 48 hours has been intense. There has also been a pretty epic amount of disdain and even a little attempted character assassination….

A note about this:

Ok, I need to address this directly, partly because it is the sort of thing that can really ruin ones reputation, and partly because I think it raises some pretty interesting questions on feminism on the internet.

Kimmy (@aRealLiveGhost) is a talented poet whose work I generally like and have recommended to others who appreciate poetry. (Think her reconfigurations of @horse_ebooks tweets are her best work.) As far as I know, she got her start just tweeting authentically. At some point, she started posting pictures of herself along with her poetry. She also seemed alarmed by the number of followers she was getting. 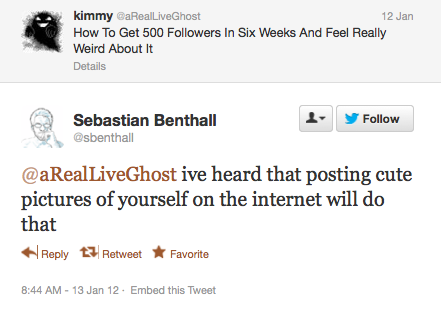 That was in January, which was before she was a minor internet celebrity with thousands of followers. However, one source (see comments to this post) has noted considerable overlap between “weird twitter” and the feminist twitter landscape. In light of this whole art project/experiment thing, Kimmy referred to that tweet, which generated some discussion.

As I’ve learned, this comment bothered Kimmy, and I’ve apologized. As I’ve explained, my intention was to point out that there might be some connection between (especially a woman) posting cute pictures of herself on the internet and her suddenly getting a lot of attention on the internet. The recent Violentacrez scandal highlights the extremes of this, and why I might be concerned on her behalf.

This comment, which some have called “anti-woman”, has been variously interpreted as:

I take feminism rather seriously and so I found these accusations pretty hurtful, actually. But then I thought about it and realized that taken together, they make no sense. So, I’m over it.

EDIT: In the ensuing discussion over this, I’ve learned a lot about how feminists think about this comment. It’s reasonable for women to suspect that somebody making such a comment has hostile or demeaning intentions, and that problem is especially exacerbated in low-bandwidth computer mediated communication such as Twitter, where so much is left to interpretation. I regret saying it.

In other words, the experiment was a wild success in terms of generating a significant reaction. However, the results coming in were literally all over the map: random hate, denial that the phenomenon existed, direct confirmation that the phenomenon existed, questioning of the meaning of it. A surprising number of people telling me I had “ruined” something, or “didn’t get” something.

Basically, there was every possible angle of existential crisis represented in the response from the collective consciousness of weird twitter.

Or maybe subconscious. Some people on Twitter seem to see it as primarily an expression of the subconscious. Which would explain why it hates getting called out so much.

These results were nonetheless inconclusive. Weird twitter was being awakened from its subconscious, unreflective slumber. So I gave it a kick.

This post was of course the kind of postmodern ironic half-joke that seems to be so characteristic of “weird twitter” but I guess it went over the heads of a lot of people.

There’s a legitimate concern here that this post involved what the academic and mainstream press has termed “cyberbullying”. But I made a calculated decision that people who were actively being dickish about the whole thing to me directly were asking for it and could handle being made fun of. In case anyone else was concerned (one person who contacted me was), I spoke with@bugbucket and @hellhomer and we’re cool.

In case you are wondering, if you were to ask me “How many people do you think are part of Weird Twitter?”, I’d now say “about 3,000”, if you operationalize “weird twitter” as “the number of people who care enough about being called out as Weird Twitter to read an article about it”. There may, of course, be multiple or overlapping weird twitters. Maybe other parts of the “weird twitter” landscape could be identified by referring to other patterns of behavior. (Maybe there’s a weird twitter that tells completely different jokes than the ones identified in the original post) Perhaps this only got to the most sensitive or curious bunch, those that actively click links. There’s also no accounting for factors like time zone.

Really the next thing to do would be to try to map out the actual social network structure.

Qualitatively, there were a lot of interesting reactions and questions raised in this process. I want to note them here before I forget:

If you’ve read this far, then thank you for your interest. I’ve found this a very rewarding and insightful experience, and I hope you have gotten something out of it as well.