I’ve decided to make a small change to my on-line identity.

For some time now, my Twitter account has been listed under a pseudonym, “Gnaeus Rafinesque”, and has had a picture of a cat. Today I’m changing it to my full name (“Sebastian Benthall”) and a picture of my face. 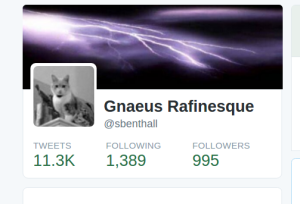 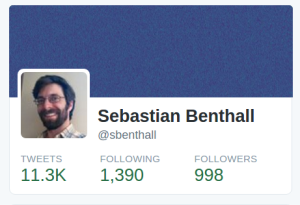 I chose to use a pseudonym on Twitter for a number of reasons. One reason was that I was interested in participant observation in an Internet subculture, Weird Twitter, that generally didn’t use real names because most of their activity on Twitter was very silly.

But another reason was because I was afraid of being taken seriously myself. As a student, even a graduate student, I felt it was my job to experiment, fail, be silly, and test the limits of the media I was working (and playing) within. I learned a lot from this process.

Because I often would not intend to be taken seriously on Twitter, I was reluctant to have my tweets associated with my real name. I deliberately did not try to sever all ties between my Twitter account and my “real” identity, which is reflected elsewhere on the Internet (LinkedIn, GitHub, etc.) because…well, it would have been a lot of futile work. But I think using a pseudonym and a cat picture succeeded in signalling that I wasn’t putting the full weight of my identity, with the accountability entailed by that, into my tweets.

I’m now entering a different phase of my career. Probably the most significant marker of that phase change is that I am now working as a cybersecurity professional in addition to being a graduate student. I’m back in the working world and so in a sense back to reality.

Another marker is that I’ve realized that I’ve got serious things worth saying and paying attention to, and that projecting an inconsequential, silly attitude on Twitter was undermining my ability to say those things.

It’s a little scary shifting to my real name and face on Twitter. I’m likely to censor myself much more now. Perhaps that’s as it should be.

I wonder what other platforms are out there in which I could be more ridiculous.